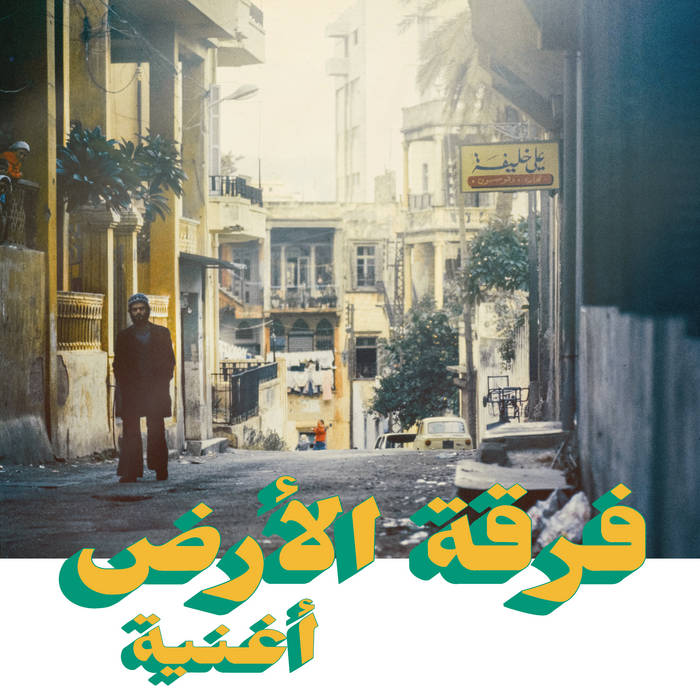 TwinTrash One to bring to a deserter island, moods to experience every day, lush, melancholic, imaginative, chill, expressive, longing, heartfelt, melodic, profound, down-to-earth, magical, generous journey of an album… Can’t wait for Al Ard’s second one to be reissued. Thank you so much and peace for keeping this music alive <3 Favorite track: Lahnon Lemra'ati Wa Beladi.

Vik Srinivasan Wow- absolutely beautiful, incredible album rooted in Palestinian poetry, jazz, folk, and hints of Brazilian influence. Finding myself playing this on repeat. Thanks to Habibi Funk for this essential reissue. I saw someone online compare the band to Arthur Verocai. I definitely have to agree with that :) Favorite track: Oghneya.

zach/زَكَرِيّا such a lovely song about the rain in the morning
Favorite track: Matar Al Sabah.

An absolutely legendary album from Lebanon by Issam Hajali’s group Ferkat Al Ard, “Oghneya” stands out as one of the great musical gems of the Arab world. A groundbreaking release from 1978 that represents the meeting point of Arab, jazz, folk and Brazilian styles with the talent of Ziad Rahbani, who did the albums arrangements. Filled with a variety of sounds and genres, from Baroque Pop to Psych-Folk to flashes of Bossa Nova, Tropicalia and MPB, “Oghneya” is like if Arthur Verocai took a trip to Beirut in the 70’s to record an album.

Sadly there are two tracks from the original release of “Oghneya” that did not make it onto the reissue. “Ghfyara Ghaza” was replaced by the song “Juma’a 6 Hziran.” while “Huloul” was taken off without a replacement. This happened as a precondition from the band for this reissue to happen. We would have loved to include all tracks, but the decision ranged between having either a reissue like the one we put out or no reissue at all. Thus, an easy choice for us.
credits

In late 2016, our friends Ernesto and Natalie of Beirut Groove Collective invited me to DJ at one of their parties in Beirut. A year or so before that, I had heard Ferkat Al Ard’s music for the first time, a Lebanese trio compromised of Issam Hajali, Toufic Farroukh and Elia Saba. I was ecstatic about the groups unique blend between traditional Arabic elements, jazz and Brazilian rhythms going hand in hand with poetic-yet-politically engaged lyrics. I learned that the band was active in the left-wing movement of Lebanon of the time and that they communicated their political ideas candidly through their songwriting.

I tried to search for information about the band and eventually found a recently published interview on a very small blog with Issam Hajali, the band’s singer. The only clue the article gave was to mention as a side note that Issam has a shop on Mar Elias Street, Beirut. This sounded to me like a great and precise piece of info, but it became less illuminating after I realized that this street is more than one kilometer long and is nothing but small shops. Nevertheless, I went there on a Thursday in early December 2016 and started asking people whether they knew where to find Issam Hajali. I ended up having an hour of nice, yet unsuccessful conversations until a tea vendor pointed me to the right place.

In our mind the idea was to see whether Issam was interested in re-releasing “Oghneya.” He was not opposed to it, but also made it clear that it was not his priority for a first project. He suggested we start with his first album, before Ferkat Al Ard was formed, “Mouasalat Ila Jacad El Ard,” which was recorded in 1977 in Paris together with his friend Roger Fakhr (whose work we have been privileged to re-release in the meantime as well.) “Mouasalat Ila Jacad El Ard” is melancholic, stripped-down, guitar-based folk intertwined with jazz-fused breaks, and here and there the unique sound of the santour glistens through. While the music is very accessible, some song structures are rather atypical, neglecting common patterns of verse, hook, verse, hook. The lyrics mostly trace back to the poetic work of Palestinian author Samih El Kasem, with one song also written by Issam, who composed the music for the whole album.

We re-released Issam’s “Mouasalat Ila Jacad El Ard” in 2019 to a great reception, with positive reviews all over the place. There is an ongoing appreciation for the album that to this day does not
seem to diminish the way many albums tend to fade from the public eye a few months after the release. This also meant it was time for us to undertake an “Oghneya” re-release again!

If you compare “Mouasalat Ila Jacad El Ard” and “Oghneya,” one apparent distinction is the strong Brazilian influence in the music. Issam Hajali explained to me that you can already hear traces of this influence on his debut, but it’s “Oghneya” where this musical relationship really peaks. Lebanon and Brazil have had a strong connection for nearly a century due to the continuous flow of immigrants from one country to the other. Today, Brazil has the largest Lebanese diaspora in the world, the “Brasilibanês” [for further reading on this subject we highly recommend Gabrielle Messeder’s article “Brazilian Encounter - Beirut’s ‘Golden Age’, Ziad Rahbani, and Lebanese Bossa Nova” (2021)].

The migratory route was not a one way street, however, and some Lebanese returned to their home country, taking recordings of the music they learned to love in Brazil with them. They were followed by Brazilian musicians who visited primarily Beirut during the 1960’s and the first half of the 1970’s, just like many other musicians from around the world. In these years between the independence and the beginning of the civil war, Beirut became even more of a cultural center and regional hub than it already was. You can get an idea of the multitude of musical influences in Beirut at the time when you visit the city’s Sunday markets to look for vinyl; you might end up finding everything from Fela Kuti, to Francoise Hardy to Oum Khaltoum.

Bossa Nova, at that time, was one of the defining sounds of Brazilian popular music. Issam Hajali remembers hearing it at a bar in Beirut’s Hamra district in 1974, which hosted musicians from Brazil playing the occasional gig. When Issam had returned from Paris in 1976 he got to know Ziad Rahbani, son of Fairouz, who had a shared passion with Issam for a lot of things, among them Brazilian music. Issam showed him some of the tracks he was working on, and Ziad agreed to help with arranging them. The music that evolved from this cooperation between Ferkat Al Ard and Ziad Rahbani’s arrangement is, to put it lightly, outstanding. Issam’s singing is embedded into the uniquely beautiful string arrangements backed by the band’s poignant, swinging groove. The lyrics of the songs on “Oghneya” are based on poems by Mahmoud Darwish, Samih Al Qasem and Tawfiq Ziad, three pillars of Palestinian poetry within the last century, and their influence on “Oghneya” was itself a strong political statement during the Lebanese war.

“Oghneya” was eventually released in 1978 by the band themselves on cassette tapes. Finding a blank tape that fit the playing time proved to be impossible during the war so they needed to open up the case of each cassette to physically cut down the tape and customize it to the playing time. The album was well received, though some cultural critics deemed it too “occidental” in its sound. While the cassette was circulating, Ziad Rahbani started a label called Zida, together with Khatchik Mardirian. They decided to help the band with a re-release on vinyl in 1979, a year after “Oghneya” was originally released on cassette.